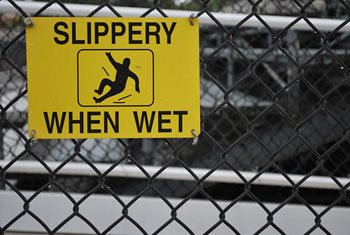 A slip and fall lawyer can be engaged for cases in which a person claims that his or her experience of injury and pain, and the resultant distress and financial repercussions, due to slipping and falling on another person’s property imposes liability on that other party. A slip and fall lawyer can accordingly assist the plaintiff with arguing that the defendant possessed an understood and accepted right to provide for the safety of others on his or her property, and failed to provide for this duty at an adequate amount.

Background for slip and fall lawyers

Slip and fall lawyers are legal representatives within the larger area referred to as civil law. People interested in understanding the full range of legal expertise possessed by the slip and fall lawyer they are considering engaging can accordingly understand the basic context of civil law in contrast to the other main system, that of the criminal justice system.

Contrast between civil and criminal law

The U.S. legal system, which owes much of its structure and the underlying theories which have shaped it to the intellectual inheritance of the historical British legal system, is referred to as a common law system. This allows for the division between criminal and civil law. The criminal justice system allows for the government to enforce the adherence of citizens and residents to the statutes which it has passed into legal effect. On the other hand, the civil law system allows for individuals and groups to bring civil actions against each other as private entities (even if government bodies are numbered among the parties to a civil action).

A slip and fall lawyer can be regarded as a practitioner within one of the larger sectors within the overall context of civil law, that of the field reserved for personal injury lawyers. As such, slip and fall lawyers resemble other legal representatives who similarly allow for those adversely affected, in mental or physical form, by the actions or omission of action of others to be accordingly compensated.

A slip and fall lawyer might have to deal, for one, with ambiguity over which individual exercising ownership or otherwise understood use of a property thus bears liability for the personal injury case at hand.

Small Claims Court proceedings may be adequate for some slip and fall cases, and as such exclude Slip and Fall lawyer involvement.