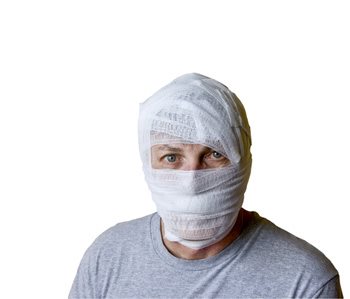 What are Head Injuries?
A head injury refers to any particular type of trauma that affects the human head.  This type of physical injury may or may not include actual trauma or injury to the brain. However, the term head injurywill often times used to describe injuries to the brain as well.
What are the Types of Head Injuries?
Head injuries will often times be classified as either external or internal injuries. External injuries are those that occur on the surface of the head, the scalp, or the skull. Typically, these types of injuries will not necessary affect the brain, though it is not uncommon.
Internal head injuries are those that cause some sort of trauma to the brain, often times with the injury causing skull fracture. However, a skull fracture is not necessarily needed for an internal brain injury to occur.
Head injuries can also be classified in terms of closed or open injuries. A closed head injury is one where the actual skull will not suffer a fracture. An open head injury is one where the skull is fractured and the dura mater is breached by an object.
What are Some Common Head Injuries?
There are various types of head injuries that exist, all causing different types of health issues, both as a result of the injury and afterward. The following is a list of some of the most common head injuries:
1. Concussion: Concussions are among the most commonly reported head injuries in the world, with over four million concussions occurring on a yearly basis. It is classified as a mild brain injury where the head strikes an object or an object strikes the head, causing the human brain to move significantly within the skull.
This type of head injury is very common in sports, particularly those considered to be contact sports such as football. As a result, concussions can lead to unconsciousness, period of memory loss, headache, and drowsiness.
2. Intracranial Hemorrhage: Intracranial hemorrhage is internal bleeding that occurs within the human skull. The most common cause is usually when a blood vessel within the skull bursts or leaks. Physical trauma can lead to intracranial hemorrhage, though it can also be caused by non-traumatic factors, such as hemorrhagic stroke or aneurysm. It is considered to be a serious medical situation due to the blood building up in the skull which causes intracranial pressure. The pressure build-up can lead to damaging of brain tissue within the skull. Though certain physical signs may be apparent to help diagnose intracranial hemorrhage, such as such as nausea, weakness, vomiting, and seizures, the only proper way to determine intracranial hemorrhaging is with the use of a CT scan.
3. Cerebral Contusion: Refers to a head injury which causes the bruising of brain tissue. This often results when the head will suffer significant trauma, causing the brain to bounce off of the skull and causing for the tissue to be bruised, such as in the case of a motor vehicle accident or significant fall. Headache, dizziness, increased size of one pupil, and weakness on one side of the body are common signs of a cerebral contusion.